Most STCU members go to Martin Stadium in Pullman for football. But an increasing number have "fumbled" upon STCU ATMs installed around the stadium to get cash at halftime.

There are actually six STCU ATMs at Martin available to fans on game day. (Tune in for WSU's final game  on December 27 at the Cheez-It Bowl in Arizona!)  Martin is one of dozens of curious places you might run into a cash-dispensing ATM. 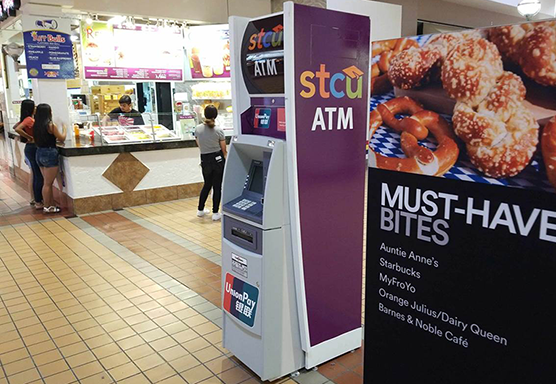 You can't seem to go anywhere without running into an STCU ATM. There's a stand-alone ATM in Suncrest and one on Main Street in Deer Park. There's even one at STCU's Argonne Home Loan Center, Mission and Mullan, for what? To withdraw money for down payment on a house?

"The truth is the traffic patterns of our members are not as random as you might think. Through years of experience, we've determined the most frequent routes our members take from home to work, to shop and to run errands. And a lot of those banking needs occur during off hours when our 23 branch locations are closed. For some people, the ATMs are STCU."

Like other growing financial institutions, the not-for-profit credit union has been investing in creative and convenient locations for what's known in the business as remote banking. The machines are costly, but far less than the millions it can take to build a full-service branch location that, through changes in traffic patterns or the economy, might lose its appeal a generation later. Plus, ATMs, like all robots, don't need health care benefits or coffee breaks.

"I'm not going to make some bold claim that artificial intelligence will replace tellers," Arbuckle says. "But if you're standing in a line just to cash a check or make a deposit, well, yeah. An ATM can do that for you with your debit card. Many of our locations have multiple ATMs so you can do easier transactions at the ATM v. waiting for a teller who may be helping someone else."

In at least one instance, STCU closed a branch, but left the ATM. The credit union's University District Branch, in downtown Spokane, was shuttered in 2018 when traffic patterns changed and the credit union opened another branch downtown. Yet, the ATM is still buzzing with transactions.

"Turns out most people using the University District location just wanted to withdraw cash, check balances, or deposit a check," Arbuckle says. "An ATM can do all that, 24 hours a day." Newer ATMs are very smart. Some can help you make loan payments. Most can transfer funds. And all of them dispense cash for quick purchases, like buying a hot dog at a football game.

Because of its 85-year history of serving educators, STCU leans toward locating ATMs around centers of higher education. In addition to Martin Stadium, STCU has ATMs on the campus of Eastern Washington University, Spokane Community College, Spokane Falls Community College, Whitworth College, and WSU Spokane.

Installing the ATM at Eastern's Pence Union Building was such a big deal that STCU announced the ATM on a billboard at the entrance to Cheney.

"Swoop your stacks. New ATM in the PUB!" the billboard reads.

In search of ATMs?

Members of STCU and other credit unions who participate in the Co-Op Network offer surcharge-free access to ATMs found in cities across the country. The network is a not-for-profit cooperative of ATM locations that treat visiting members like their own.

With your account number and identification, you can cash checks, make loan payments, withdraw cash, and even get a printout of your statement in the lobby of participating credit unions or at a Co-Op Network-affiliated ATM. To locate the nearest ATM, use the Co-Op phone app, text your Zip Code to “91989,” or call (888) 748-3266.